I recently saw an article about the twenty dumbest things said on a popular sports show.  I was discussing this with a colleague.  He said you often hear the sentiment that winning is all about “wanting it badly enough.”  When the Miami Heat started losing a couple years ago, Lebron James was berated for not wanting it badly enough.  Recently some analysts predicted that the less experienced Chris Algieri would beat Manny Pacquiao, the only fighter in history to have titles in eight different weight classes, because Algieri was hungry and wanted it badly.  Pacquiao knocked Algieri down a whopping six times!  I don’t doubt Algieri’s work ethic, tenacity, (or as they say in boxing) “heart.”  But sometimes positivity is just not enough when you’re facing an all-time-great.   I’m not a professional athlete but I can relate to these cliches.  I’ve heard well-meaning people tell me or insinuate that I could beat my disease (or wouldn’t have gotten sick in the first place) if I wanted health badly enough as if fighting an illness is like competing in the Superbowl.  Sometimes, people tell me that God would heal me if I had more faith.  This is insulting to many people dealing with chronic illnesses and disabilities.  Believe me:  Sometimes, there is nothing I want more than not to be in pain every minute of every day.

People see my cane and ask, “What were you doing before you got sick?  Did you exercise?  What were you eating?”

I think it would make them feel better if I told them I was an obese, lazy, drug addict.  It would justify my getting sick because I deserved it.  It’s hard to confront your own mortality, and admit that sometimes bad things happen to good people.  Sickness can be random–I was fit, young, and exercising  five days a week before Myasthenia Gravis invaded my life at the age of twenty-four.  I went from doing yoga to not being able to feel my legs within four months.

Positivity Is Not A Guarantee

Don’t get me wrong:  I’m not saying that positivity and gratitude have no benefits.  As someone with five illnesses (bipolar 2, polycystic ovarian syndrome, MG, asthma, and psoriasis), counting my blessings has helped me stay sane.  I’ve seen resilient and positive loved ones survive cancer.  But I’ve also lost many resilient, positive loved ones to cancer.  Too many, in fact.  Reducing life and death matters to positive thinking is taking the concept of positivity to absurd heights.  If being positive or good were all that mattered, millions of children wouldn’t live in poverty.

I remember one day–a year after I was hospitalized in critical condition for MG–I was typing.  I had to work very hard at re-learning many activities like showering, eating, and typing.  I was eager to get my life back on track (I still am).  All the sudden, the 24/7 pain in my fingers was amplified.  I screamed.  The pain shot right through me.  My cousin, who was sitting next to me sternly said, “You have to fight this.”  That was all he said.  Then, he returned to his work at his computer.  While I’m sure he meant well, it came across as a lecture, especially since he’s never fought an illness.  I am not a wayward athlete who skipped practice.  I’m a hardworking, sick person fighting five opponents that are sometimes stronger than I am.  Living with chronic illness, I have rough days, and sometimes rough seasons.  Sometimes, I have good days.

One oft-repeated expression that irks me is, “Happiness is a choice.”  As someone with bipolar disorder (who has also lost a friend to this disease), sometimes happiness is not completely within our control.  Chemical imbalances and mental illnesses are real.  Many people with mental illnesses or chronic pain or fatigue diseases (or all of the above) wake up determined to be positive but there are days when the illness wins.  When that happens, I tell myself: Okay, I lost this round.  But I’m gonna get the next one.  Implicitly or explicitly asking patients to deny their pain (I’ve had people ask me how I’m doing and then walk away when I don’t say “fine”) or reducing their struggles to positivity and effort exacerbates our pain.  Yes, it’s hard to know what to say when someone you love is hurting or dying.  When in doubt, the best thing to do is listen.   The simple act of listening is validating.  When I friend listens, I feel like I’m not in this alone. 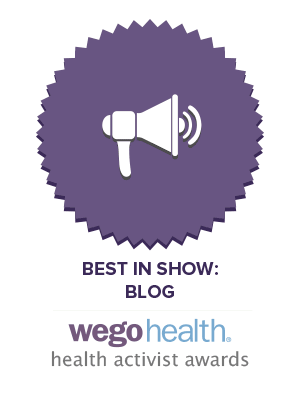 If Fashionably ill has blessed you, please take a moment to “endorse” me (vote) for Best in Blog in the WEGO Health Activist Awards here by clicking on the purple button below my picture. 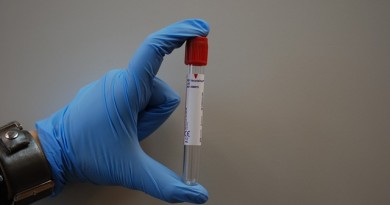 Waiting for Test Results: Why I Plan a “Celebration” Before Every Appointment 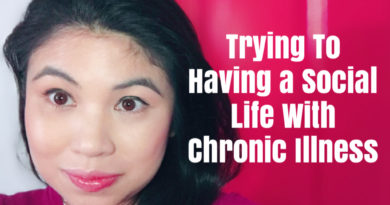 9 thoughts on “Victim Blaming Happens to Sick People Too”