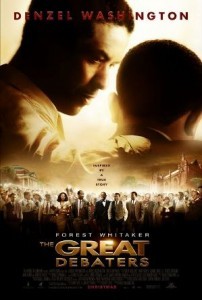 One of my favorite movies is 2007’s The Great Debaters.  It’s about a lot more than debate; it’s about resilience.  (Basically, the film is a biopic about the struggle of a debate coach Melvin B. Tolson—played by Denzel Washington—and his team at the historically black Wiley College.  They strive to be taken as seriously as whites in the Deep South in the 1930s.  The students face a lot of ugly discrimination; at one point they even stumble upon a lynching.  They eventually emerge victorious and are invited to compete at Harvard University.)  This movie made me cry the first time I saw it.  I took the Mock Trial Team I was coaching to see it in theaters.  All of this brings me to today’s WEGO question as I continue National Health Blog Post Month:

My Mascot!   Give your condition, community, or self a mascot. Who is it? What do they represent? What is their battle cry?

Well I have more than one condition.  One thing I’ve learned is that all pain—physical or emotional—is pain. I was diagnosed with Bipolar II at the age of 18 after the suicide of a friend, diagnosed with Polycystic Ovarian Syndrome (PCOS) at 19, and later Myasthenia Gravis (MG) and asthma at the age of 24.  Each of these illnesses has tested my faith, confidence, and endurance in the same way.  While the symptoms are all different, the heart and mind are tested in the same way.  At one time, when I was a teenager, bipolar seemed insurmountable.  But I now know that’s not true.  I graduated from Northwestern University with two majors despite the bipolar disorder and PCOS.  And there have been times when MG seemed much bigger than I am.  But I’ve learned from past experiences with bipolar depression that anything is possible with God (Philippians 4:13, “I can do everything through Christ who gives me strength.”).  Basically when the MG is kicking my butt, I kick back by telling myself, “Same God.  Different problem.  Same God.  Different disease.  This too shall pass.”  The bedrock of my self-confidence is my faith in a God who does not fail me even when my body does.

Surviving one episode after another (some nights I think, “Jessica vs. PCOS Round # 1000”), I rely on what I learned about faith and myself from previous episodes.

This reminds me of a scene in The Great Debaters when Tolson asks his team if they know about a character from Greek Mythology—here’s the exchange between Tolson and his students:

Tolson:  Anyone know who Antaeus was?

Students:  Sure. He was a gigantic wrestler in Greek mythology.  His mother was, Gaea – the goddess of Earth.  And, he was unbeatable because anytime someone threw him down to the Earth, it would make him stronger.

Whenever I face a setback in the form of a sleepless night in excruciating pain or a violent brush with the flu, I remember Antaeus.  A true warrior keeps going no matter what.

Who is your mascot?

Do you have a mascot?  What symbolizes your strength?  Stay tuned as I continue blogging for WEGO’s Challenge.

Join us on social media!  I just started a new Facebook page for this blog https://www.facebook.com/fashionablyill in order to create community.  It’s about surviving illness with style and a sense of humor.  My Facebook goal is to get 500 Likes.  I’m also on Twitter; join me here: https://twitter.com/JessicaGimeno

NKOTB Prove “The Right Stuff” Comes in All Sizes

Slowing Down is Surviving; Not Giving Up