Valentine’s Day is coming.  Many people have asked me to blog about dating and chronic illness.  However, I am not an expert on this subject.  So, I’ve decided to do a three-part series featuring stories from people with chronic illnesses who are.  I’m really excited for these series.  Today, we welcome guest blogger, Emily.

Emily is a contributor to the blog, Defying Disabilities.  Here is Emily’s story:

I have a genetic illness called cystic fibrosis (CF). It’s significantly invasive but also an invisible illness with no cure. It affects almost the entire body, but the primarily damaged systems are the reproductive, the digestive, and the respiratory systems. Our lungs create a lot of problems and most of the time, eventually lead to respiratory failure. According to the 2012 Cystic Fibrosis Patient Registry, the median survival age is 41 years old. That’s an improvement, believe it or not. When I was born in 1984, my parents were told I had a “50/50 shot of seeing 18.” They didn’t try to stamp an expiration date on me, but the prognosis with CF has never been great. I have been fortunate and just turned 31 a few weeks ago. My health takes up a lot of my time and it creates a lot of issues, but I’m still alive. I’ve personally seen friends die as young as 17, many in their 20s, many in their 30s.

Relationships are always work. Add significant stress to the situation and they’re extra work. CF, as noted briefly above, falls under the “significant stress” umbrella. CF tends to add complications to every stage of a relationship, just as it gets in the way of everything else. I am a straight female, so I will be writing this from that perspective. All readers are welcomed and encouraged to read while keeping their appropriate pronouns in mind.

Let me shine some light on CF symptoms for those of you unfamiliar with it. Our lungs are such a large problem because all of the mucus in our bodies is thicker and stickier. I cough a lot, every single day of my life, often bringing up thick green mucus in the process. Our pancreases are also often faulty, and most of us do not have the proper functioning digestive enzymes. As such, our digestive systems are also quite problematic. Lots of constipation and blockages (I had surgery at two days old to remove an intestinal blockage caused by CF), diarrhea, greasy stools, excess and particularly awful gas, and the list goes on. Introducing a new date to these issues is always a bit of a struggle and brings up lots of questions. When do I tell him? What do I tell him? How much do I tell him? How will he react? Will he be grossed out or scared? Will he back off? In the case of CF, not only are symptoms pretty gross and invasive, but our lives are usually cut short as well. These are all very pertinent issues when talking about spending your life with someone.

Talking to Your Date About CF

It’s a very strange feeling to tell someone you’ve been on a few dates with what CF is, and what it means as far as your lifespan goes. I have always handled it very straight forwardly, but that’s not necessarily the right method for everyone. I find that’s a very personal issue and has to be handled how each person prefers, though I would lean towards recommending honesty and open communication. So strange feeling or not, the men I date have always been told pretty early on what my health involves and what it means. If a guy is going to bail because of my health, I’d rather know straight off the bat and not waste my time.

Not Being Able To Have Kids

My boyfriend Ryan and I have known each other for a long time. We met when we were teenagers, were friends for nine years, and only got together as a couple in 2011. I’ve been very fortunate with him for an endless list of reasons. He was already well versed on CF before we had our first date, having been my close friend for nearly a decade. There was no dilemma of “When do I tell him?” or “How do I explain it?” with Ryan, because all of that was already done. We still have to face some very heavy issues together. I previously mentioned reproductive problems. While most of us encounter difficulties, some are at least able to have children (sometimes naturally, though often with medical assistance). I, personally, am entirely unable to have kids. That is something Ryan and I have had to discuss at length in order to make sure we were both on the same page and both okay with our options and decisions. Not being able to have children is a pretty big deal, and despite Ryan’s unyielding support and agreement on the topic, it’s never fun to have the choice taken away from you entirely.

The Financial Cost of Illness

Finances are a huge burden as well. My medications are ridiculously expensive; without insurance, they easily cost approximately $15,000 on a “normal” month. If you include my specialty doctor’s visits, weeks of IV medication, being inpatient at the hospital, sputum cultures, blood work, X rays, etc., it quickly goes well above that already obscene $15,000 monthly bill. On top of that, I can’t work full time because when I tried, my health declined much too quickly. We need to be able to secure incredibly comprehensive health insurance in order to keep me alive and not go bankrupt. We need to be sure that he can take care of me whenever it is that I get to end stage CF, and that we live close enough to my doctors.

Those are the longer-term problems, but we also still deal with CF-related complications on a daily basis. Anytime Ryan and I have plans, we have to be sure that I make time for all my medications and therapies, such that they still get done. Skipping so much as one day can make a drastic difference in my health. Many times we’ve been out and something unexpected pops up. For example, one time we left a bar and had to walk through the cloud of smoke right outside the door. Immediately thereafter, despite trying to hold my breath through the smoke, I had to sit on a curb outside and cough for 15 minutes before I could finish walking across the parking lot to the car. He just sat beside me, fished my inhaler out of my pharmacy of a purse, and waited for me to cough it out, as that’s usually the only “solution.”

Being with a CF patient takes a very patient, considerate, hard-working, thoughtful, loving, and committed individual. Even for the ones like me, who are lucky enough to find a person that can handle it, it’s a constant struggle. Ryan and I deal with my CF on a daily basis. He never claims to understand what it feels like, but it does significantly affect both of us in so many ways. That’s really the summation of it all. In dating, a person with a chronic illness needs to find someone who will choose to tackle the illness with them. CF is my disease. I’m the one stuck in this messy body, but Ryan has chosen to take it on with me, and that requires a very special type of person.

Fashionably ill readers fight a wide variety of illnesses and we often find strength in each other.  Like our Facebook page to meet other warriors like yourself: https://www.facebook.com/fashionablyill 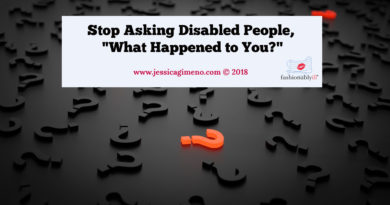 Stop Asking Disabled People, “What Happened To You?” 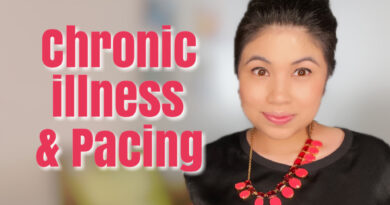