Continuing WEGO’s National Health Blog Post Month, I’m answering this prompt:  “I Still Remember…”  Free write a post that starts with this line and describes an unforgettable moment in your health journey.

I still remember a night three years ago when my then three-year old nephew, Mikko, changed my views about pain, myself, and life.  Being tired and bedridden I sometimes feel like a shell of my former self.   Like I could be a better aunt if I weren’t sick so much—I wouldn’t miss a single game or recital.  At one family dinner, I couldn’t sit at the table because the Polycystic Ovarian Syndrome (PCOS) pain and Myasthenia Gravis (MG) pain were kicking my butt.   My ovaries felt like freshly sharpened pencils were piercing them and my back was aching.  I cried silent tears in a genuine, “WHY GOD?” moment.  Then I heard Mikko whisper, “Mommy, what’s wrong with Tita Jessica?”

A few minutes later he came to me and said, “Hurts? Hurts?”  I nodded yes.  Then he came back ten minutes later to give me a pillow for my stomach.  Later he checked on me again and brought me a flower he tore off my aunt’s plant.  Disassembling furniture or houseplants—Mikko would do anything to take away my pain.   That night Mikko reminded me that I am blessed despite of the pain.

THE WISDOM OF CHILDREN

Mikko understands empathy and compassion better than half the adults I know.  Sometimes he’ll see me in pain and even when I say nothing at all, he’ll put his hand on my shoulder.  He’ll sit with me in silence or tell a joke to make me laugh.  But it’s not just Mikko who makes me feel like the luckiest aunt in the world.  I have other nieces and nephews—some of whom are old enough to remember pre-MG Tita Jessica.  Mikko’s older brother, Tyson, was five-years old when I was diagnosed and hospitalized in October of 2008.  I endured two weeks of plasmapheresis.  He made me this card with a pink puppy.  When he got to the hospital, he saw a pink puppy in the gift store.  The clock said, “Store closes at 3:00,” but it was only 2:45 pm.  Apparently, the employees called it a day early. 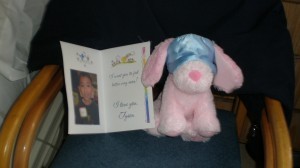 They ignored Tyson as he knocked on the door.  Finally, after ten minutes of pounding on the door, they opened the store and Tyson got the puppy.  All the nurses on my floor knew who Tyson was.

My niece Hannah was only four-years old when I was diagnosed in 2008.  Her parents hosted Bible study weekly.  While all the parents got together for Bible study, the children would gather together in the playroom.  Once a playmate asked Hannah, “Who is this Jessica we keep praying for?”  Hannah, who is very shy, immediately replied, “That’s my Tita Jessica.  She’s sick, and we’re going to pray for her.”   My nieces, Tia and Ryanne, are now in junior high.  Even though I am very different than I was when they were younger, somehow they still know how much I love them and that I’d do anything for them.  At a recent gathering, one child tried to play with my cane.  Tia immediately told him, “Hey that’s her cane.  And she needs it.  She has an illness.”  Through my unique experience and honesty, my nieces and nephews have gleaned invaluable lessons on compassion.  They know how to love better than some adults.  In 2008, I lost some college and high school friends I’d had for eight years—some of them spent every Christmas at my house every year.  One friend in particular, Curt, said he’d visit me in the hospital.  He never came.  I haven’t seen him in five years.

WHEN DESPAIR WAS SHATTERED

That family dinner in 2010 was a jolt of hope that broke through despair.  It was a reminder of God’s ability to bless me even in dark times.  Because of my nieces and nephews, I am reminded that God exists and life is worth living.

What is an unforgettable moment in your journey?  See you tomorrow; I’ll be blogging about how mental health affects my overall well being.