On Presidents Day, my mom, nephews, and I saw the The LEGO® Movie.  We all had fun.  However, the little one dropped his popcorn bucket because he’s little.  Because of my neuromuscular autoimmune disease (Myasthenia Gravis, MG), I also dropped my bucket.  (I feel bad for the employee who had to clean our mess.)  After the movie, when I was in the bathroom,

my purse fell in the sink!  (The sink in the disability stall is large enough to bathe a small child).  So my purse was floating like a rubber ducky in a bubble bath.

I laughed because pre-Myasthenia Jessica would have had a designer purse swimming in that sink.  (This purse, by contrast, was inexpensive.)  Before MG, I would have had a Prada or Louis Vitton submerged.  Losing a $2,000 purse (even though it was a gift from my aunt) would have made me cry.  Accidents can happen to anyone so this could have happened even I didn’t get MG.

Don’t get me wrong:  I’m not denying that chronic pain and fatigue suck but I’ve also learned some important lessons.  Some of you might have always known these things but I’ve learned them having four illnesses: MG, Polycystic Ovarian Syndrome (PCOS), Bipolar II, and Asthma.

Sickness Taught Me How To:

1.  Differentiate between wants and needs:  Before I used to have 15 pairs of stilettos.  I even had “errand high heels” for things like grocery shopping.  That many shoes would be okay if I was a talk show host or a Sex in the City character but I’m not.  Now I have a handful of shoes—wedges, flats, and winter boots, which are more than enough. The same goes for my purses.

2.  Extend grace more:  Before MG, I was always punctual and I got annoyed when people were really late to my dinner parties.  Because of MG, it takes energy to shower and put my clothes on so I’m late sometimes.  Occasionally, if I’m depressed, that can also make it hard to get dressed.  Now, I understand how people with the best intentions can be late.

Furthermore, 60% of my brain cells are devoted to memorizing medical information (how many meds to take, when the next shift is, when to call the pharmacist, when my next doctor’s visit is, etc).  Today, despite my Type A personality, I forget things I never forgot before.  Now when other people make mistakes, my first instinct is to give the benefit of the doubt.

3.  Value “the little things”:  As I’ve previously blogged, chronic illness has forced me to miss Thanksgiving twice.  I’ve heard from many readers who say that they have no family to celebrate with, which makes me appreciate my family more.  Last fall I attended my six-year old nephew Mikko’s piano recital.  He greeted us at the door enthusiastically like the future talk show host he is.  For our family, Mikko’s recital is just as important as Thanksgiving.  The events I miss make me more thankful for the ones I don’t miss.

4.  Find community in unlikely places:  I’m an extrovert who has been forced to spend most of my adult life in bed.  I was in excruciating PCOS pain on New Year’s Eve.  But last NYE, I held an Online Party during SyFy’s two-day Twilight Zone Marathon.  My goal was for no one to be alone on New Year’s.  Fifty guests came and we now have our own Facebook group.  And I will host another online party next NYE.

5.  Not sweat the small stuff:  I can laugh at things that might have hurt me in the past.  For instance, I was at a small group meeting (church group) where we discussed creation and evolution.  I cited apologists and founding fathers of the church that didn’t believe in a literal six-day creation.  My point was that thoughtful people of faith could believe different theories.  Then some people got really angry and insisted, “You don’t have faith!”  After that heated exchange, people asked me if I was okay.  I said, “Seriously? I’m in pain every minute of everyday.  I’m not going to lose sleep because so-and-so doesn’t think I’m a Christian.”  I’ve got bigger (proverbial) fish to fry. 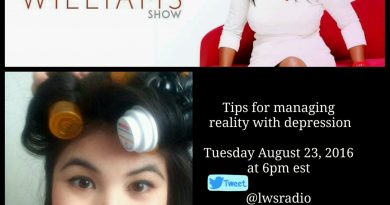 Tune in! I’ll be on The Lanada Williams Show Tuesday at 6 pm EST/5 pm CST